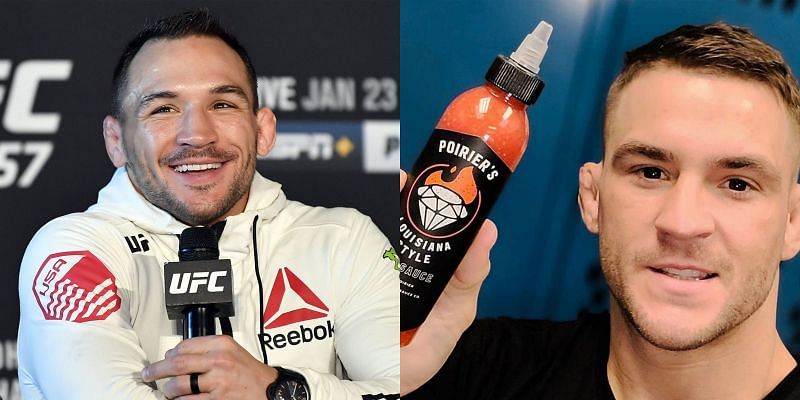 Michael Chandler believes that Dustin Poirier may have to continue to sell the hot sauce for a while if he lets the title fight opportunity slip out of his hands. In a recent interview with MMA Fighting, Michael Chandler suggested that Dustin Poirier could find himself on the sidelines while the lightweight division moves on if he continues to refuse a potential fight with Chandler.”He (Dustin Poirier) said if they want (Michael) Chandler to fight for the title, he’ll go sell hot sauce and truthfully he might end up just being a hot sauce salesman for the next six months because I think the title picture is going to move on… I’m not saying I’m not going to be one half of it, but I do know life is about opportunities, life is about saying yes and life is about performing… especially in this industry. I’ve said yes at every single opportunity,” Michael Chandler told MMA FightingMichael Chandler’s remarks on Dustin Poirier refer to Poirier’s recent business venture and respond to the statement made by Poirier in an interview with MMA Junkie. While crediting Charles Oliveria for putting a streak together to earn a shot at the lightweight strap, the No. 1 ranked Poirier showed no interest in the prospect of a title fight against Michael Chandler, who defeated Dan Hooker by a spectacular knockout on his UFC debut at UFC 257.“I want to be the world champion, and Charles is a guy that’s paid his dues. He’s earned where he’s at, no doubt about it. Let him and Chandler fight for the belt. If they want Chandler in there for the title, and he’s calling for the title, let them fight for the belt. I’ll take a step back and just watch,” Dustin Poirier told MMA Junkie.Dustin Poirier’s disapproval of Michael Chandler is not a recent occuranceFollowing champion Khabib Nurmagomedov’s retirement in October 2020, Dustin Poirier, Charles Oliveira and Michael Chandler have emerged as top contenders with a strong case for the championship belt. But unlike Poirier and Oliveria, who competed in the UFC for almost ten years, Michael Chandler is a former Bellator champion who has competed in the UFC only once so far. This has led critics in the MMA community to question his place at the top of the heap.While talking to ESPN in October 2020 following a failed negotiation with the UFC for a fight with Tony Ferguson and newly signed Michael Chandler, Dustin Poirier expressed his disapproval over Chandler’s salary in comparison with a longtime UFC fighter like him.”I would never count another man’s money. I hope (Michael) Chandler makes a ton of money in the UFC but the fact that I have been in the UFC for ten years, (I’ve been a part of) fight of the year contenders over and over again. I think eight main events, two pay-per-view main events and the guy (Michael Chandler) is gonna come here and make more money than me? I understand it’s business but if you want me to fight that guy, you gotta step it (Fighter pay) up,” Poirier told ESPN

No formal announcement involving any of the top three lightweights has been made by the UFC as of now but an assured fight of the year contender seems to be shaping up behind the curtains.
Published 05 Feb 2021, 06:15 IST