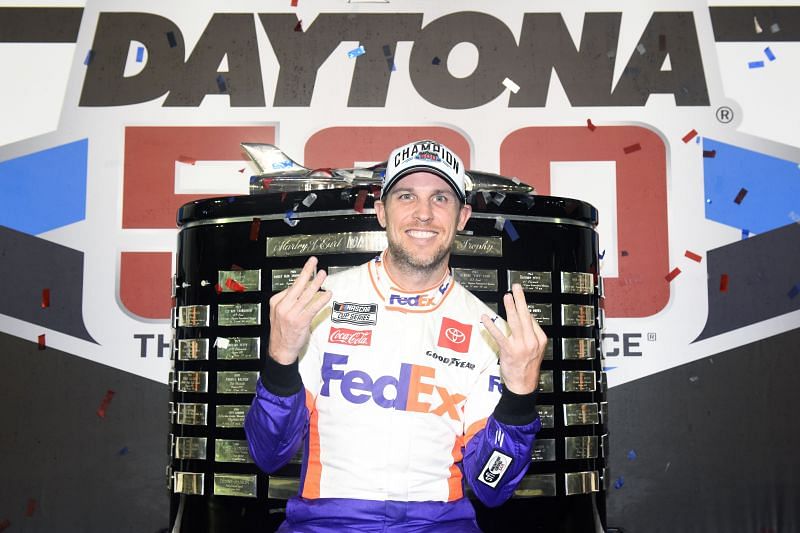 Denny Hamlin has won the Daytona 500 three times. A fourth victory in the Great American Race would be the “biggest victory” of his career, the veteran driver says. Denny Hamlin has won three of the last five Daytona 500 races, including the last two. He could become the first driver to win biggest race in NASCAR three straight years. That would make him the third driver to win the Daytona 500 four or more times. “This is big opportunity for us,” Hamlin said at Daytona 500 Media Day. “My team and myself personally, I just never imagined we would be in this position. Five years ago, we didn’t have any.”Also Read: Joe Gibbs Racing Daytona 500 Preview Denny Hamlin, who has 44 career victories, won the 2016 Daytona 500. Three years later, he won it again in 2019 to jumpstart a six-win season. Hamlin clinched the season-opening Daytona 500 again last season and went on to bag seven wins. He has finished fourth in points in each of the last two seasons, but has never won the NASCAR Cup Series championship.“I always think about … all the ones that slipped away that I had in control and didn’t make the right decision at the end to finish it off,” he said. “It would be by far my biggest victory of my career and one that I probably wouldn’t exchange for anything.”Daytona 500 Preview: WWE’s Sasha Banks to serve as honorary starterHow did Denny Hamlin win the Daytona 500 three times?Denny Hamlin has been a consistent frontrunner at Daytona and in the Daytona 500, scoring 10 top-five finishes at the track and leading 204 laps in his three Daytona 500 victories. He won the 2016 Daytona 500 with crew chief Mike Wheeler, who now works with driver Bubba Wallace at Hamlin’s 23XI Racing. Chris Gabehart has helped lead him to the Daytona 500 win the last two years.

“He (Chris Gabehart) kinda allows me to do what I do on the superspeedways,” Hamlin said. “He tries to give me the fastest car he can possibly give me, but it all comes down to the end. … Is your car damaged? Can you get with teammates at the end? Can you make the right moves and decisions? For him, a lot of it is around strategy and it’s around making sure he puts me in a good position at the end to be upfront when it really counts. That’s where our communication and our partnership really works well on these superspeedways.” Denny Hamlin leads the 2020 Daytona 500.Also Read: Denny Hamlin says Michael Jordan excited about first Daytona 500Denny Hamlin has been a consistent winner throughout his career. He won at least one race in each of his first 12 seasons before going winless and struggling to an 11-place points finish in 2018. He has bounced back strong the last two seasons, however, winning 13 races in 2019 and 2020.“I didn’t take for granted that we just win every year and that’s just part of what we do,” he said. “2018 was just kind of one of those wake-up years. I needed to get better and everything needed to get better and we kinda went through a transition there where I kinda worked on myself on and off the race track and really focused a lot of my efforts on getting better as a race car driver and Chris did a great job of getting the most out of me each and every week.”.@JoeGibbsRacing, @FedEx and I have shared a lot of big wins and special moments together throughout our 16 years together. And we’re nowhere near done. Still have a lot of racing and winning to do for a coach and all the FedEx team members. Let’s go! https://t.co/tpIYQ7Z4FM— Denny Hamlin (@dennyhamlin) February 1, 2021

Denny Hamlin credits Gabehart with helping make him a championship contender last year.“When he came in, a lot of it was me working on the driving aspect and giving him the free rein to do whatever he needed to do with the race car and trusting each other,” he said. “Whatever has happened it has clicked and worked well and we have gotten a lot of success because of that.”Also read: What Denny Hamlin’s contract extension with Joe Gibbs Racing means for his future
Published 07 Feb 2021, 05:23 IST