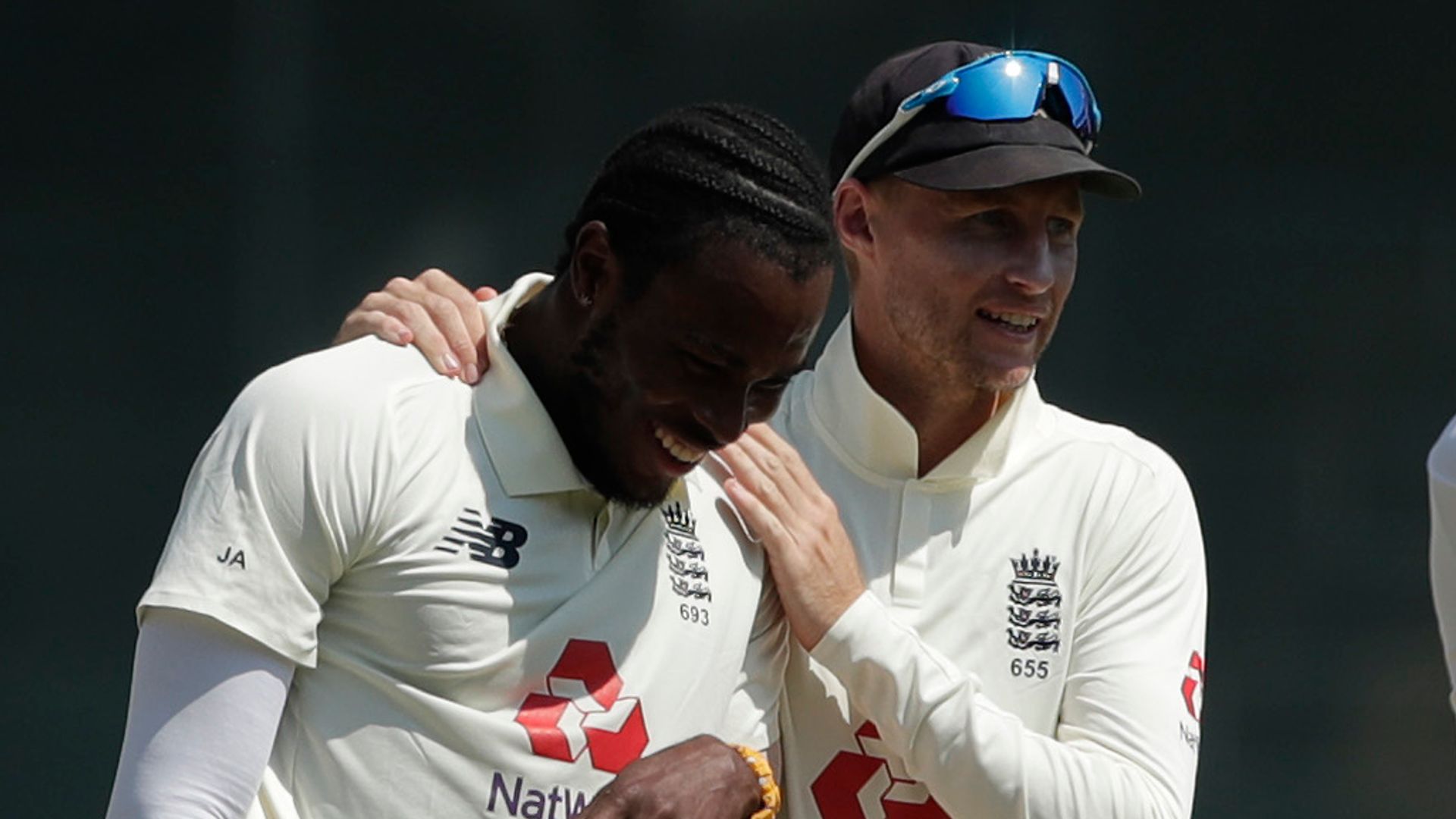 Dom Bess and Jofra Archer starred with the ball as England retained control of the first Test against India, following an enthralling day of cricket in Chennai.
Joe Root’s men were bowled out for 578 early on day three before Archer (2-52) and Bess (4-55) left India 257-6 at the close, 321 runs adrift.Rishabh Pant (91) and Cheteshwar Pujara (73) provided impressive resistance for the hosts, who were left floundering at 73-4 at one stage, although England remain in pole position as they eye a famous victory. On England’s last visit to Chennai, India reached 759-7 in their first innings, but the visitors will be very satisfied with their exploits on day three, which saw them largely nullify the most decorated batting line-up in Test cricket.Archer returns in style Archer produced a blistering spell with the new-ball which set the tone for England’s impressive day with the ball (BCCI) Archer set the tone for England with a blistering new-ball spell. The 25-year-old was featuring in his first Test match since August having been rested for the two-match series in Sri Lanka, but it was like he had never been away.England’s opening bowlers struggled to make an impression during the 2016 tour, but on a pitch offering very little for seamers, he managed to find pace, bounce and movement which led to both India openers departing in quick succession.Renowned for his explosive pace, Archer also demonstrated his considerable skill with the subtle use of variations, employing the leg-cutter to great effect during his new-ball spell.His extra bounce accounted for Rohit Sharma (6) early on in the innings, and he was indebted to his fellow paceman James Anderson for a terrific catch at mid-on to remove the accomplished Shubman Gill (29).It also maintains Archer’s impressive record against top-order batsmen. Since making his debut during the 2019 Ashes, he averages just over 16 against openers in the longer format – second only to Ishant Sharma in that department.Anderson wasn’t at his penetrative best on day three, but Archer relished the responsibility of taking the new ball, and the dynamic he provides ensures he’ll be central to any success England enjoy in 2021.Bess makes his mark Bess removed four of India’s most senior batsmen to give England control of the opening Test (BCCI) Bess came of age in Chennai, producing arguably his best spell in England colours to give his side a wonderful opportunity to secure the lead in this four-match series.Bess’ haul of 12 wickets in Sri Lanka did little to alleviate the scepticism surrounding his pedigree – partly due to his fortuitous five-for in the opening test – yet he certainly made his mark against the might of India.The 23-year-old became just the fifth spinner to remove the trio of Kohli, Rahane and Pujara in the same innings on their home turf, and the first off-spinner to dismiss Kohli in India since November 2017.Admittedly he enjoyed some good fortune to remove Rahane and Pujara – the former succumbed courtesy of an incredible grab from Root, whilst Pujara was caught at mid wicket, after his pull shot inadvertently clipped the shoulder of Ollie Pope at short leg.However, the dismissal of Kohli was a classic off-spinner’s wicket – he bowled with real control on a consistent off-stump line, before drawing the India captain forward with a slightly wider delivery to find the inside edge.Bess was unable to recapture the consistency that accounted for Kohli later in the day, although he still claimed the prized scalp of Pant (91) to add to his tally, and he can reflect on a day of real progress; where he demonstrated growing evidence of his maturity as a Test player.Leach punished by Pant It was a tale of two spells for Leach, who salvaged his figures following a pummelling at the hands of Rishabh Pant While Bess enjoyed a day to remember, Jack Leach was subjected to a relentless barrage of big hitting from Pant, yet it was a case of two spells for the 29-year-old, who recovered impressively late into day three.Pant came to the crease with his side wilting at 73-4, but India’s wicket-keeper reaffirmed his mercurial reputation with an exhilarating innings – making 91 from just 88 balls.Pant struck 48 runs from just 21 Leach deliveries, refusing to let the left-arm spinner settle by advancing down the track to tremendous effect, albeit with a hint of good fortune. Pant’s tally of five sixes against Leach is the most by any Indian batsman against an English bowler in a Test innings, surpassing the record held by Kapil Dev, who hit Eddie Hemmings for four consecutive maximums at Lord’s in 1990. It was a chastening experience for Leach – who conceded 77 runs from his opening eight overs – although the wicket of Pant prompted his return, where he then relinquished just 17 runs from his next nine overs.Leach bowled with great discipline against Washington Sundar and Ravichandran Ashwin, and may consider himself unfortunate to end the day’s play wicketless. He was allowed to settle into a rhythm and duly did so, but the acid test will come when he’s targeted once more by India’s heavy artillery. Does he possess the necessary variations to combat such an onslaught? It could be a defining challenge.Follow over-by-over text commentary of day four of the first Test between India and England in Chennai on skysports.com and the Sky Sports app from 3.55am on Monday.