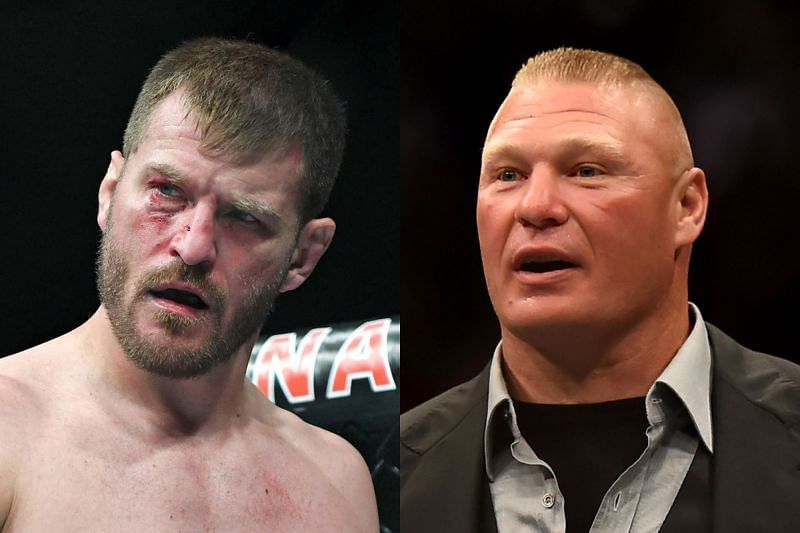 Stipe Miocic recently recalled when Brock Lesnar entered the UFC octagon after Daniel Cormier defeated Miocic at UFC 226.In a recent appearance on the show Oral Sessions with Renee Paquette, Stipe Miocic shared his account of the incident and shed light on his state of mind in the octagon following the biggest loss of his career. When the host asked Miocic what were his thoughts upon seeing Lesnar in the cage, he said:”I want to go home. I just lost. It’s just kind of weird I haven’t even lost in a couple of years… I just kinda felt that I got knocked out by the guy I should’ve knocked out… It was just kind of a cluster… I had no idea what’s going on. Right before I walked out they showed him (Brock Lesnar) on a cut in the TV. I see what’s going on here. You kind of put two and two together but yeah, it was just kind of weird. I wish I would have gotten my moment to speak ‘hey guys, I want a rematch’ but (it didn’t happen),” Stipe Miocic said. UFC heavyweight champion Stipe Miocic fought then-light-heavyweight champion Daniel Cormier in the superfight headliner of UFC 226 on July 8, 2018. Daniel Cormier defeated Stipe Miocic in the first round via knockout to become the second simultaneous two-division champion in the promotion’s history after Conor McGregor.UFC teased former UFC champion and pro-wrestling sensation Brock Lesnar’s return in the lead-up to the fight. Lesnar attended the event to many old-school fans’ delight and entered the UFC octagon after the finish.After having a brief scuffle with newly-crowned champion Daniel Cormier, Brock Lesnar took to the mic and announced his return to the UFC.”Let me tell you something. I walked into this building and watched the heavyweight disasters from the beginning, (Francis) NGannou the piece of sh*t, (Stipe) Miocic the piece of sh*t, DC (Daniel Cormier) I am coming for you MF,” Brock Lesnar said in a classic pro-wrestling swagger. Stipe Miocic had made his way back to the top

Brock Lesnar’s subsequent retirement put all speculation about a Lesnar versus Cormier fight to rest. Cormier fought Stipe Miocic in a rematch at UFC 241 after defending his belt against Derrrick Lewis nine months prior. Miocic won the fight via fourth-round knockout and later won the trilogy fight at UFC 252 in 2020 via unanimous decision.Stipe Miocic is scheduled to defend the heavyweight title against Francis NGannou at UFC 260 on March 27, 2021. The fight is a rematch of their first meeting in 2018 that Miocic won via unanimous decision to become the only heavyweight champion in UFC history to defend the title three consecutive times. The card also features a featherweight title fight between champion Alexander Volkanovski and a resurgent Brian Ortega. The venue for the event will be announced in the weeks to come.
Published 07 Feb 2021, 06:09 IST