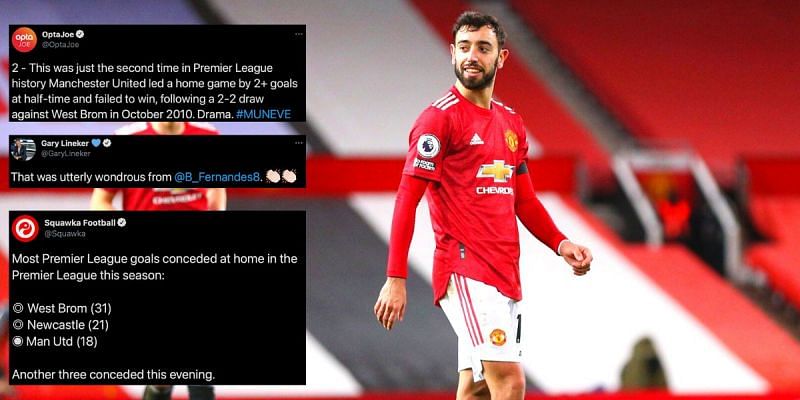 It was a dramatic night at Old Trafford as Manchester United share the spoils with Everton in a six-goal thriller. Toffees star Dominic Calvert-Lewin scored the all-important equaliser late into injury time to give Carlo Ancelotti’s side a point in the game that was largely dominated by the hosts.United fielded a strong XI to begin the game with as they looked to build on their historic 9-0 thrashing of Southampton at the same venue. However, Ole Gunnar Solskjaer was dealt an early blow as superstar midfielder Paul Pogba had to be withdrawn in the first half due to an injury. United held a healthy 2-0 heading into half-time due to two spectacular goals.The first was a predatory header from Edinson Cavani in the 24th minute to meet a wicked cross from Marcus Rashford coming from the right-hand side. The second was arguably one of the most stunning strikes of the campaign so far as a nonchalant Bruno Fernandes unleashed a wonderful, David Beckham-esque curling effort from outside the box, swirling past the grasp of a helpless Robin Olsen. The sheer quality of the strike was sublime, and was an apt representation of their dominance.The second half was quite a contrast to the first as a spell of just over three minutes saw Everton equalise twice early in half. Abdoulaye Doucoure capitalised on a poor decision from David de Gea in the 49th minute, parrying the ball into the Frenchman’s path and allowing him to score from just a couple of yards out.Just over three minutes later, James Rodriguez met Doucoure’s ball in the opposition box and the Colombian rifled home to give Ancelotti’s side a precious equaliser. Scott McTominay’s expertly-placed 70th-minute header was the goal that appeared to be the difference right up until the end, but Everton had other plans.Axel Tuanzebe gave away a cheap free-kick in the dying seconds of injury time from which Lucas Digne delivered a brilliant cross. Michael Keane, formerly of United, got a near-post flick on and Calvert-Lewin found a way past De Gea to score a scrappy goal, giving Everton a point from the game.This draw comes as a crushing blow to United’s hopes of a maiden Premier League title in eight years as they now find themselves two points adrift of a Manchester City side that have two games in hand over the Red Devils.Here are some of the best tweets from the game.

Feel sorry for Cavani & Bruno. Cavani ran himself into the ground and Bruno scored a wonder goal. And it all gets overshadowed by those fucking dickheads at the other end of the field.— United Religion (@Unitedology) February 6, 2021HOW TF DO YOU LOSE A 2 GOAL LEAD IN 6 MINUTES???— Trey (@UTDTrey) February 6, 2021Played well. Absolutely no blame to Solskjaer. Didn’t deserve to lose the points but full credit to Everton who just wouldn’t let it go. De Gea questions again. It’s hard with him. Past efforts, mad wages… but a lack of an endless pursuit for improvement always said a lot.— Annie Eaves (@AnnieEaves) February 6, 2021

Bruno Fernandes has scored 13 goals this season and been directly involved in 30 goals for Man United this season.The man’s a midfielder for goodness sake! 🔥 pic.twitter.com/cPGo2pdccS— Football Hub (@FootbalIhub) February 6, 2021DOMINIC CALVERT-LEWIN HAS EQUALISED FOR EVERTON IN THE 95TH MINUTE AT OLD TRAFFORD.— bet365 (@bet365) February 6, 2021

Bruno Fernandes is an absolute joke. He’s the complete package and I’m sure Manchester United wouldn’t swap him for anyone else in the world. A transformative impact like none other, he’s made the miserable bastards feel good almost single handedly— RF9 🇧🇷 (@SambaRole) February 6, 2021🗣”Why there was 4 minutes is beyond me, but all we have to do is get the ball into the corner” Ole Gunnar Solskjaer was not happy with the way Manchester United conceded their goals against Everton but was happy with their overall performance pic.twitter.com/5WZxXNoj7M— Football Daily (@footballdaily) February 6, 2021I have been fortunate enough to see several title-winning #MUFC central defensive partnerships: Bruce & Pallister, Stam & Johnsen and Ferdinand & Vidic. Deep down, Maguire and especially Lindelof does not look like another one. 30 goals conceded in 23 goals speaks for itself.— Sam Pilger (@sampilger) February 6, 2021

David de Gea has saved just 60.9% of shots on his goal in this season’s Premier League, only Rui Patricio (59.7%) of all PL keepers with 15+ apps this season.He conceded from all three shots he faced tonight. pic.twitter.com/XVTcgThjEI— Squawka Football (@Squawka) February 6, 20212 – This was just the second time in Premier League history Manchester United led a home game by 2+ goals at half-time and failed to win, following a 2-2 draw against West Brom in October 2010. Drama. #MUNEVE pic.twitter.com/9myHH5C6Sh— OptaJoe (@OptaJoe) February 6, 2021

Hurts to say this but DeGea doesn’t inspire confidence anymore. He hasn’t for a while honestly. You can’t win the must win games without a rock solid keeper. DeGea was that for a while, that’s a fact. He isn’t that anymore. That is also a fact.It needs urgent addressing.— ManUtdSense (@SensibleUtd) February 6, 2021Watching the third goal again, De Gea is so timid and we have seen that before this season (Leipzig). Not having as bad a season last season but not having a good one, either. Henderson is long overdue a run in the league. #mufc— Samuel Luckhurst (@samuelluckhurst) February 6, 2021

His close range 1v1 save% has dropped off a cliff in recent years & from watching every 1v1 he’s faced it seems to be because of his inability to properly execute the block properly & because he often backs out of it in order to avoid contact with the striker. https://t.co/3EufPMYf7O— John Harrison (@Jhdharrison1) February 6, 2021
Published 07 Feb 2021, 04:07 IST