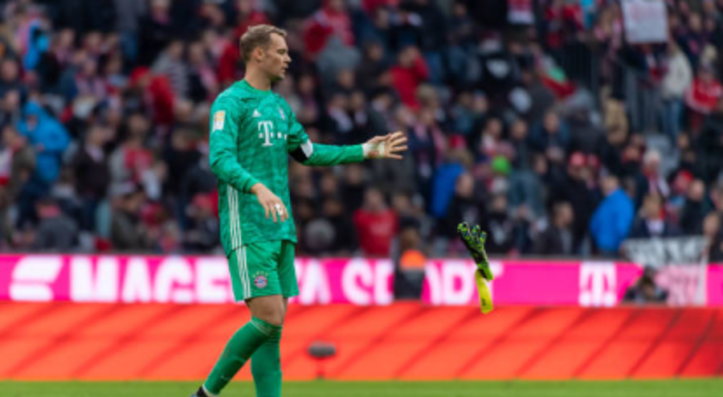 Bayern Munich edged Hertha Berlin 1-0 at the Olympiastadion at the weekend and it was thanks in large part to the heroics of their goalkeeper who features in FC’s Bundesliga Team of the Week.Manuel Neuer (9.3) made seven saves in a man of the match display, hauling Bayern to victory off his own gloves after Kingsley Coman had scored in the 21st minute. It was a win that Bayern needed as the chasing pack all picked up three points themselves, including Bayer Leverkusen who hit five past Stuttgart. Moussa Diaby (8.8), Kerem Demirbay (9.5) and Leon Bailey (8.0) were all involved in two goals each and were the star trio for Leverkusen. Diaby had game-high numbers for dribbles, big chances created and crosses, while Demirbay had a staggering seven shots and eight touches in the box from midfield. The former Hoffenheim man was also a menace defensively, winning four out of five tackles and six of his 13 attempted duels in a dominant man of the match display.Despite the defeat, Stuttgart’s Saca Kalajdzic (8.4) earned a place in the team with his side’s two goals in the 5-2 loss.Filip Kostic (9.3) opened the scoring for Eintracht Frankfurt before breaking the game open at 1-1 just past the hour mark with two rapid fire assists.The Serbian was instrumental down the left-hand side for Frankfurt, playing a game-high seven crosses, creating two big chances and leading his team with 19 passes into the final third. Rounding out the midfield is Koln’s Elvis Rexhbecaj (9.5). The 23-year-old dragged his side to a 2-1 victory over Borussia Monchengladbach, scoring both goals while contributing defensively with 10 of 11 duels won and 10 recoveries. Angelino (9.0) continued his brilliant Bundesliga campaign and features in an RB Leipzig-themed defence in this week’s team. The Spaniard provided two assists on 11 crosses and two big chances, but most impressively had 12 touches in Schalke’s box from left wing-back. Willi Orban (8.3) and Nordi Mukiele (7.4) scored two of the three goals in Leipzig’s 3-0 win, with Mukiele leading all players in aerial duels won and total duels won with six and 11 respectively.Mainz’s Stefan Bell (8.6) finishes off the team with a brilliant defensive display. The German was everywhere for Mainz with 13 clearances, 15 total duels and 10 aerials won, all of which were totals considerably higher than any other player. He added to those a team-high 54 passes at 80% accuracy, also the best in the side, and was a huge reason why Mainz were able to hold onto a 1-0 win over Union Berlin.