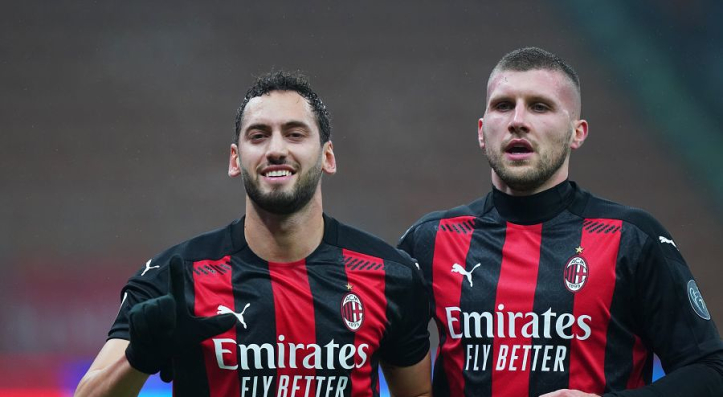 Milan continued their charge towards the Serie A title with a convincing 4-0 win over lowly Crotone at the weekend and dominate FC’s Serie A Team of the Week for Gameweek 21.The victory was thanks largely to Ante Rebic (8.7) who netted twice to round off the result after Zlatan Ibrahimovic had scored a brace earlier.The Croatian created a big chance and had seven touches inside Crotone’s box, a number bettered only by teammate Rafael Leao, and had now doubled his season’s goal tally. Musa Barrow (9.1) also had himself a double and is the highest rated player of the week, dragging Bologna to a 3-0 win over Parma. The Gambian had 90% passing accuracy which was tied for the most for his team and lost possession just 11 times overall, scoring with 100% accuracy from his two shots. Goran Pandev (8.7) rounds out the front three with another brace, this time in a shock win for Genoa as they triumphed 2-1 against Napoli. That was achieved in just 68 minutes as the evergreen 37-year-old also added a team-high three dribbles and four touches in the Napoli box in a match-winning performance. Hakan Calhanoglu’s (8.5) two assists and two big chances created earned him a place in midfield alongside Inter duo Marcelo Brozovic (8.2) and Nicolo Barella (7.9).Barella scored the first in Inter’s 2-0 defeat of Fiorentina, also creating a big chance, while Brozovic had a game-high 96 passes on 93% accuracy, with 28 of them going into the final third. Despite Napoli’s defeat, Giovanni Di Lorenzo (8.1) takes a place at right-back, leading all players with 30 passes into the final third and five crosses. Udinese hit a late double to defeat Verona 2-0, with the defence holding on thanks largely to Bram Nuytinck (7.8) who won four aerial duels, six total duels and made four clearances. Next to him is Francesco Acerbi (7.3) who led Lazio to a clean sheet, topping all players with 87 passes on 92% completion in the 1-0 win over Cagliari. Theo Hernandez (8.2) completed the most dribbles in Milan’s win with five, created a big chance with one of his five crosses to assist Zlatan for his second and was the clear choice at left-back as he continues his brilliant Serie A campaign. And rounding out the team, Mattia Perin (8.3) earns the place in between the sticks after his eight saves helped Genoa hold on for the win against Napoli, despite a late concession to Matteo Politano.