Konta retires injured but Watson through at Australian Open 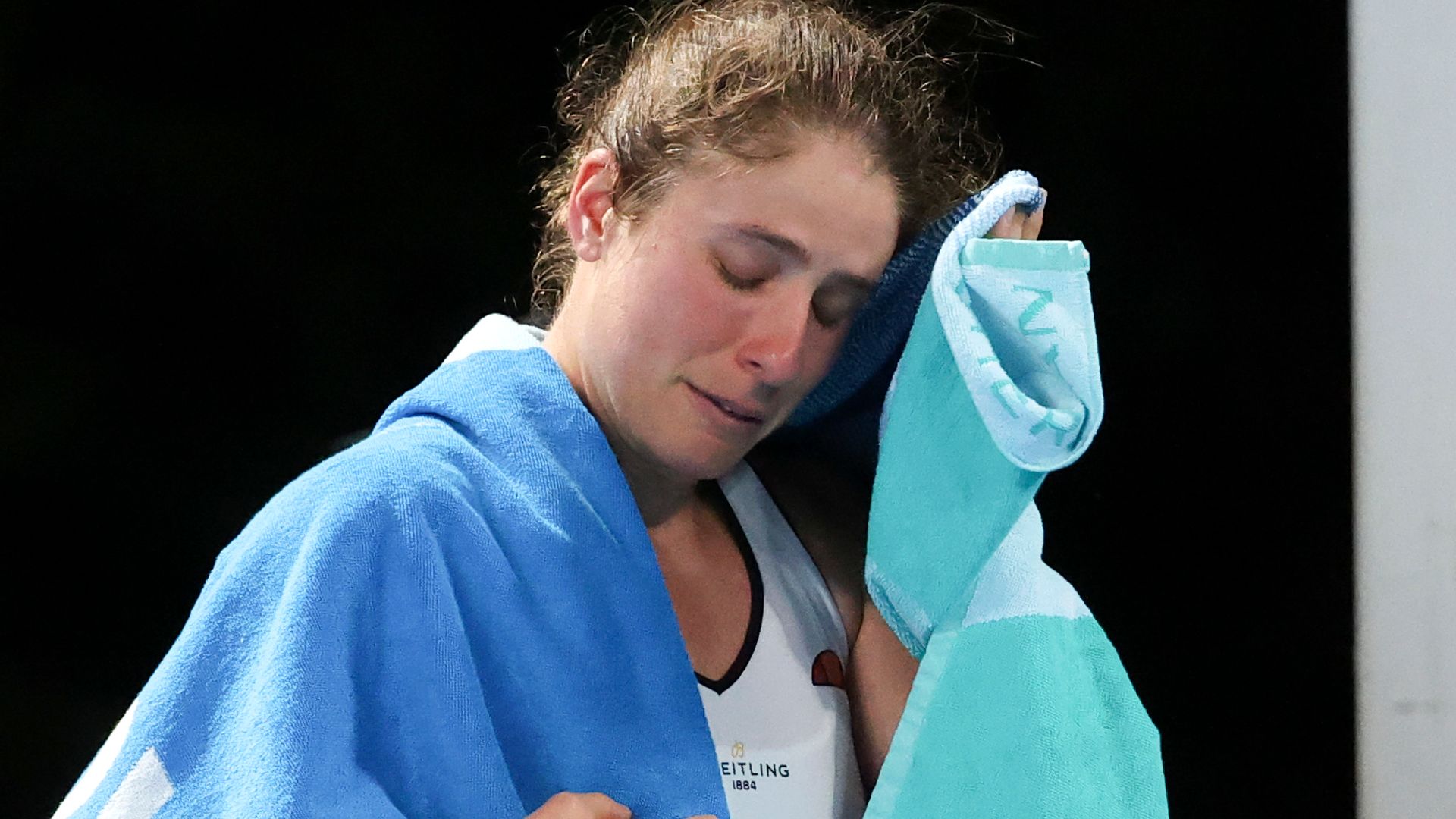 Johanna Konta is forced to retire midway through her first round match against
Slovenia’s Kaja Juvan due to injury; Heather Watson makes it through to the second round but Francesca Jones bows out at the first hurdle on her Grand Slam debut

British No 1 Johanna Konta was forced to retire injured during her first-round match at the Australian Open.
The British No 1 won the first set 6-4 but was forced to concede the match after falling 2-0 behind in the second.Konta appeared to sustain or exacerbate the injury when she stretched for a smash towards the end of the opening set, and required an on-court medical time-out to get treatment on her abdomen. The 13th seed then left the court for treatment at the end of the set, and swiftly decided not to continue after losing her opening service game of the second set to love. Johanna Konta received treatment from a trainer before calling time on her challenge midway through her first-round match It was a further setback for Konta, who endured a difficult 2020 season due to ongoing issues with a knee injury.Having recently reunited with her former coach Dimitri Zavialoff, hopes were high that the 29-year-old would be able to get her new campaign off to an encouraging start.And she appeared to have been granted the ideal opportunity against an opponent ranked 104 in the world who has never made it beyond the second round of a Grand Slam.But after making a good start the 13th seed’s hopes were evidently hampered, and two games without winning a point convinced her to call time on her challenge. Save over 25% with NOW TV Grab a NOW TV Sky Sports Month Pass for just £25 p/m for 4 months (usually £33.99 p/m) Heather Watson scored a repeat victory over Kristyna Pliskova as she put her difficult quarantine experience behind her.The British No 2 was one of the 72 players who had to stay in their hotel rooms for 14 days and she admitted it was the worst preparation she has ever had for a Grand Slam.But Watson looked impressively sharp considering and, no doubt boosted by the memory of having beaten Pliskova at the same stage last year, she edged to a 7-6 (7-4) 7-6 (7-3) victory. The British No 2 was one of 72 players who had to stay in their hotel rooms throughout the fortnight after sharing a plane with someone who later tested positive for coronavirus “It made the victory today sweeter because we’d been through a lot the last few weeks,” said Watson, who used the extra mental strength she gained in two weeks of hard quarantine to battle through.”We’d been through a lot the last few weeks. It was really tough mentally I would say the most. Physically I felt like I did a pretty good job in hard quarantine of working out pretty much every day and trying to keep up my fitness with what I could do.”Watson admitted the thought of potentially having to endure another quarantine has put her off enjoying too many of the freedoms now available to her, with fresh air and space the luxuries she is no longer taking for granted. Watson said: “I would say I felt my body change a bit (in quarantine). When you’re fit and strong, your body just feels hard. It just wasn’t as hard as usual. I definitely lost some (fitness), but that’s expected. Mentally I felt super strong because I’d got through it.”My body’s definitely sore. I’ve had an ice bath the last few days. I’m taking care of my body very carefully because actually four days ago my left leg went into spasm and I couldn’t finish practising.”I was really worried about if I was going to be able to play my first round here. I don’t get injured, so it was a surprise. Expected again with what we’ve been through. I tried to manage that as best as possible. Fortunately it healed very quickly.”Yesterday is the first day of practice where I felt like my game was starting to come back together. Having a Tuesday start was big, so I got lucky there.” Francesca Jones was beaten in straight sets on her Grand Slam debut Francesca Jones’ Grand Slam debut ended in defeat to big-hitting American Shelby Rogers in 67 minutes on Tuesday.The 20-year-old from Bradford went down 6-4 6-1 to the world No 57, a former two-time Grand Slam quarter-finalist.Jones, who had come through three rounds of qualifying to make it to Melbourne, was born with the genetic condition ectrodactyly ectodermal dysplasia, which affected the development of her hands and feet. She only has six fingers – plus two thumbs – and seven toes and plays with a specially adapted racket.Don’t forget to follow us on skysports.com/tennis, our Twitter account @skysportstennis & Sky Sports – on the go! Available to download now on – iPhone & iPad and Android