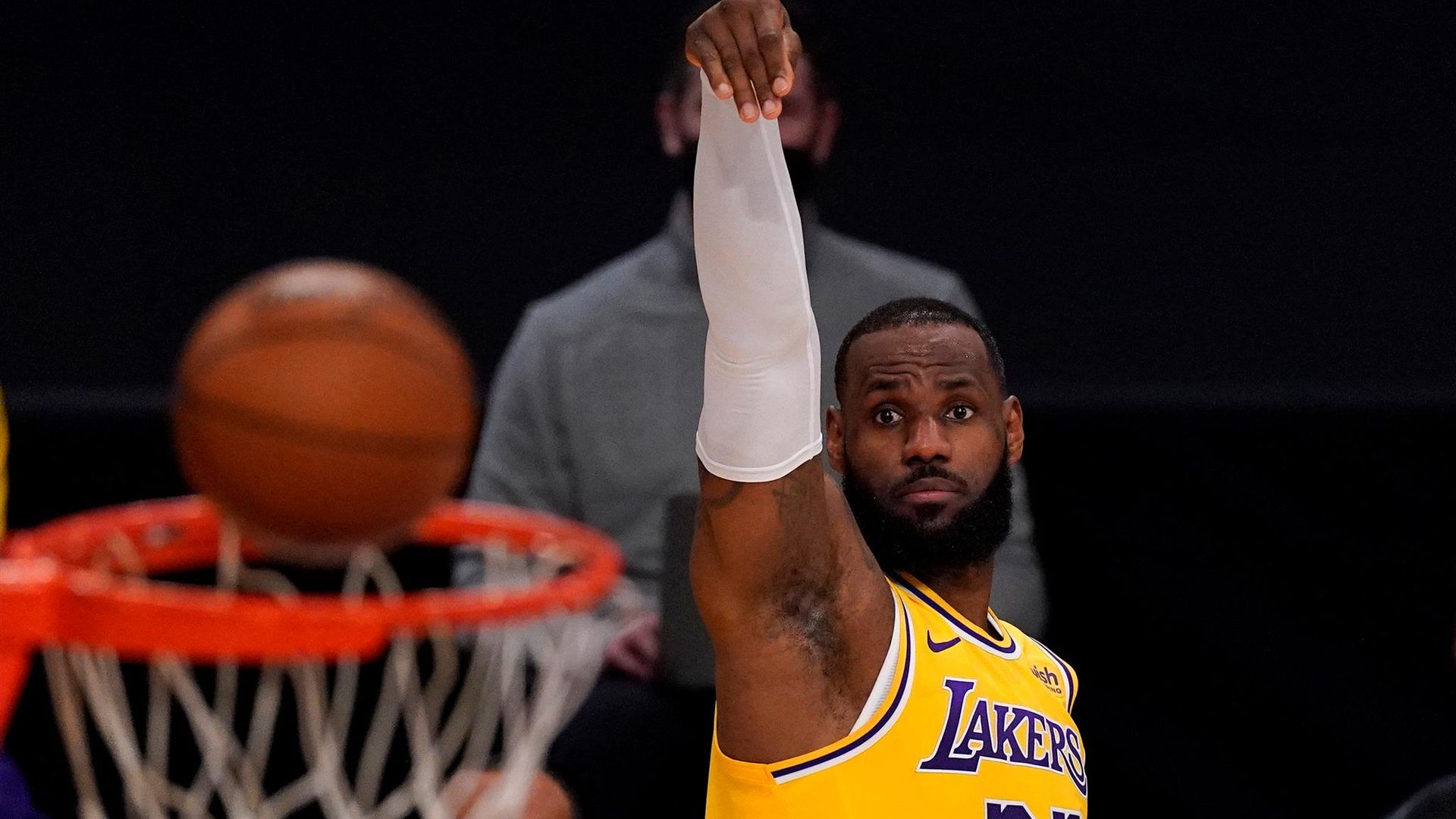 Highlights of the Oklahoma City Thunder against the Los Angeles Lakers

LeBron James had 28 points, 14 rebounds and 12 assists as the Los Angeles Lakers earned their fifth straight victory by defeating the visiting Oklahoma City Thunder 119-112 in overtime.
Montrezl Harrell contributed 21 points and eight rebounds and Dennis Schroder added 19 points, seven rebounds and five assists for the Lakers, who played without Anthony Davis (Achilles) and Alex Caruso (hand). Wes Matthews added 16 points and Kyle Kuzma finished with 11 points and 10 rebounds.
Shai Gilgeous-Alexander had 29 points, 10 assists and seven rebounds, and Darius Bazley collected 21 points and 16 rebounds for the Thunder. Hamidou Diallo scored 20 points, and Justin Jackson and Al Horford each had 14.The Lakers took command in the extra session with baskets by Harrell and Schroder and a 3-pointer by Matthews for a 117-110 advantage with 1:59 remaining.
Earlier, James’ layup tied the score at 107 with 1:13 left. Schroder hit a jumper to put Los Angeles up by two with 34.6 seconds remaining.
Gilgeous-Alexander missed a shot in the lane before Schroder made one of two free throws with 15.9 seconds left for a 110-107 lead.
After the Lakers’ successfully challenged a foul call against Schroder on a drive by Gilgeous-Alexander, the Thunder guard was fouled on a 3-point shot by Kentavious Caldwell-Pope with 1.2 seconds left. Gilgeous-Alexander made all three free throws to knot the score at 110.James misfired on a 28-foot 3-pointer to end regulation.
Washington Wizards 105-101 Chicago Bulls

Highlights of the Washington Wizards against the Chicago Bulls

Bradley Beal scored 35 points to lead the Washington Wizards to a 105-101 road victory over the Chicago Bulls.In a matchup of two of the NBA’s best scorers, Chicago’s Zach LaVine matched Beal’s point total with 35 points of his own.But with a chance to win the game in the closing seconds, LaVine couldn’t tip the scales in the Bulls’ favour.Trailing 103-101 with 9.8 seconds left, LaVine spun around Beal at the top of the key and drove to the basket, but missed a contested layup. Beal recovered the rebound, drew a foul and hit two free throws to seal the outcome.The Wizards heeded Beal’s message calling for the team to show some pride coming off Sunday’s ugly loss to the Charlotte Hornets.Rui Hachimura recorded a double-double with 19 points and 10 rebounds as Washington took advantage of a shorthanded Bulls’ frontcourt and outscored them in the paint 54-40.Things got worse in the frontcourt for the Bulls when Daniel Gafford got into foul trouble early. Gafford (10 points, five rebounds) was called for his fifth foul and picked up a technical with 9:59 left in the third, sending him to the bench and forcing Bulls coach Billy Donovan to play Thaddeus Young at centre.Toronto Raptors 128-113 Memphis Grizzlies

Highlights of the Toronto Raptors against the Memphis Grizzlies

Pascal Siakam scored 12 of his 32 points in the fourth quarter as the visiting Toronto Raptors defeated the Memphis Grizzlies 128-113.Toronto coach Nick Nurse was ejected when he picked up his second technical foul with 3:02 left in the third quarter. The Raptors, who were down by 10 points after the technical free throw, responded with a 28-5 surge to take the lead.Fred VanVleet also scored 32 points and added nine assists for the Raptors, and Norman Powell had 29 points. Chris Boucher chipped in with 12 points and 10 rebounds.

Former Raptors player Jonas Valanciunas, who had 18 points and 14 rebounds in the first half, finished with season bests of 27 and 20, respectively.Dillon Brooks scored 22 points for the Grizzlies, who have lost four straight.The Grizzlies, who led by 10 points during the third quarter, took a three-point lead into the fourth quarter.But the Raptors scored the first 11 points of the fourth quarter to pave the way for their victory.Minnesota Timberwolves 122-127 Dallas Mavericks

Highlights of the Minnesota Timberwolves against the Dallas Mavericks

Kristaps Porzingis scored 27 points and grabbed 13 rebounds and the Dallas Mavericks held off a late rally to defeat the visiting Minnesota Timberwolves 127-122.Luka Doncic added 26 points, eight rebounds and five assists, Tim Hardaway Jr. came off the bench for 24 points, Josh Richardson scored 18 and Dwight Powell added 12 for the Mavericks, who won consecutive games for the first time since January 20-22.Doncic scored 25 or more points for the 11th consecutive game, two shy of the franchise record held by Mark Aguirre and Dirk Nowitzki.Malik Beasley had 30 points and nine rebounds and Anthony Edwards scored 22 points for the Timberwolves, who lost for the fourth time in their past five games. Jaylen Nowell added a career-high 18 points, and Josh Okogie scored 11.

The Timberwolves, who trailed 95-77 going into the fourth quarter, pulled within 123-120 on Beasley’s putback that capped a 10-0 run with 50.8 seconds remaining. Beasley made two 3-pointers during the surge and Edwards threw down a dunk.Richardson made a fadeaway 10-footer with 27.7 seconds left to give the Mavericks a five-point advantage. Then he rebounded Beasley’s errant 3-pointer with 17.7 seconds to go and made two free throws with 15.4 seconds remaining to help clinch the victory.Golden State Warriors 100-105 San Antonio Spurs

Highlights of the Golden State Warriors against the San Antonio Spurs

Dejounte Murray scored 27 points, took 10 rebounds and snagged a career-best eight steals to lift the San Antonio Spurs to a thrilling 105-100 win over the visiting Golden State Warriors in the first game of a back-to-back between the teams.San Antonio led just 101-100 with 8.7 seconds to play before DeMar DeRozan canned four free throws down the stretch, and the Spurs were able to hold on.Murray’s eight steals were the most in the NBA this season. Three Spurs players posted double-doubles, with DeRozan adding 21 points and 10 assists, and Jakob Poeltl scoring 14 points and grabbing 11 rebounds. Rudy Gay and Devin Vassell scored 11 and 10 points, respectively, for San Antonio, who have won three straight games.Stephen Curry paced the Warriors with 32 points while Kelly Oubre Jr. added 24, Andrew Wiggins hit for 11 points, and Draymond Green had 10 rebounds and 10 assists for Golden State, who have dropped two in a row.Cleveland Cavaliers 113-119 Phoenix Suns

Highlights of the Cleveland Cavaliers against the Phoenix Suns

Devin Booker scored 36 points and the Phoenix Suns had just enough without Chris Paul to finish off a 119-113 victory at home against the Cleveland Cavaliers.Mikal Bridges had 22 points, while Deandre Ayton added 15 points and 16 rebounds, as the Suns won their third consecutive game and sixth in their last seven.Collin Sexton scored 23 points and Darius Garland added 17 as the Cavaliers dropped their fourth consecutive game and sixth in their last seven. They were starting a five-game road trip.The Suns were up by as many as 12 points in the second quarter, but the Cavaliers worked their way back into the game to lead 91-89 at the start of the fourth period.Cleveland pushed its lead to 100-95 with 8:31 remaining on a jumper by Damyean Dotson before the Suns found a sense of urgency. E’Twaun Moore, Cameron Johnson and Booker all hit consecutive 3-pointers for the Suns in a 1:21 stretch.The lead changed hands throughout the final quarter, with the Suns moving on top for good 114-113 on a 3-pointer by Johnson with 2:04 to play. Sexton had a turnover and a missed shot in the final minute, and Cleveland did not score a point over the final 2:26.Milwaukee Bucks 125-112 Denver Nuggets

Highlights of the Milwaukee Bucks against the Denver Nuggets

Giannis Antetokounmpo had 30 points and nine rebounds, Khris Middleton scored 29 points and grabbed 12 rebounds and the visiting Milwaukee Bucks beat the Denver Nuggets 125-112.Bryn Forbes had 15 points and Brook Lopez and Donte DiVincenzo scored 13 each for the Bucks, who have won five straight.Nikola Jokic followed up 50-point performance Saturday with 35 points and 12 rebounds, and Will Barton scored 20 of his 24 points in the first half for the Nuggets.Paul Millsap had 14 points, Monte Morris scored 12 and Jamal Murray returned from a one-game absence to produce 11 points for Denver, which has dropped three straight. Murray shot 4 of 17 from the floor.The Nuggets led by six early in the third quarter after Michael Porter Jr. hit a 3-pointer, but Milwaukee responded with a big run. Middleton was fouled on a 3-point attempt and hit all three free throws, Forbes drained a 21-footer and Antetokounmpo dunked off a turnover to spark 15 straight points from the Bucks to turn the tide.Houston Rockets 94-119 Charlotte Hornets

Highlights of the Houston Rockets against the Charlotte Hornets

Rookie LaMelo Ball drilled a career-best seven 3-pointers as the Charlotte Hornets blitzed the Houston Rockets from behind the arc in their 119-94 win at the Spectrum Center.Ball paired 24 points with 10 assists to pace the Hornets, who improved to 4-0 at home in the second half of back-to-back sets. Charlotte finished 19 for 41 on 3-pointers, with Ball, Gordon Hayward (3 for 5) and Terry Rozier (3 for 8) hitting at least three 3-pointers to lead the charge.Still, despite the Hornets’ barrage, the Rockets pulled even at 87-87 with 23.7 seconds remaining in the third quarter on a second-chance basket from rookie forward Jae’Sean Tate. But Houston did not score another field goal until Victor Oladipo sank a 3 with 4:16 left to play, and the Hornets seized control with a 21-1 run that pushed the Rockets into a 108-88 hole.Want to watch even more of the NBA and WNBA but don’t have Sky Sports? Get the Sky Sports Action and Arena pack, click here