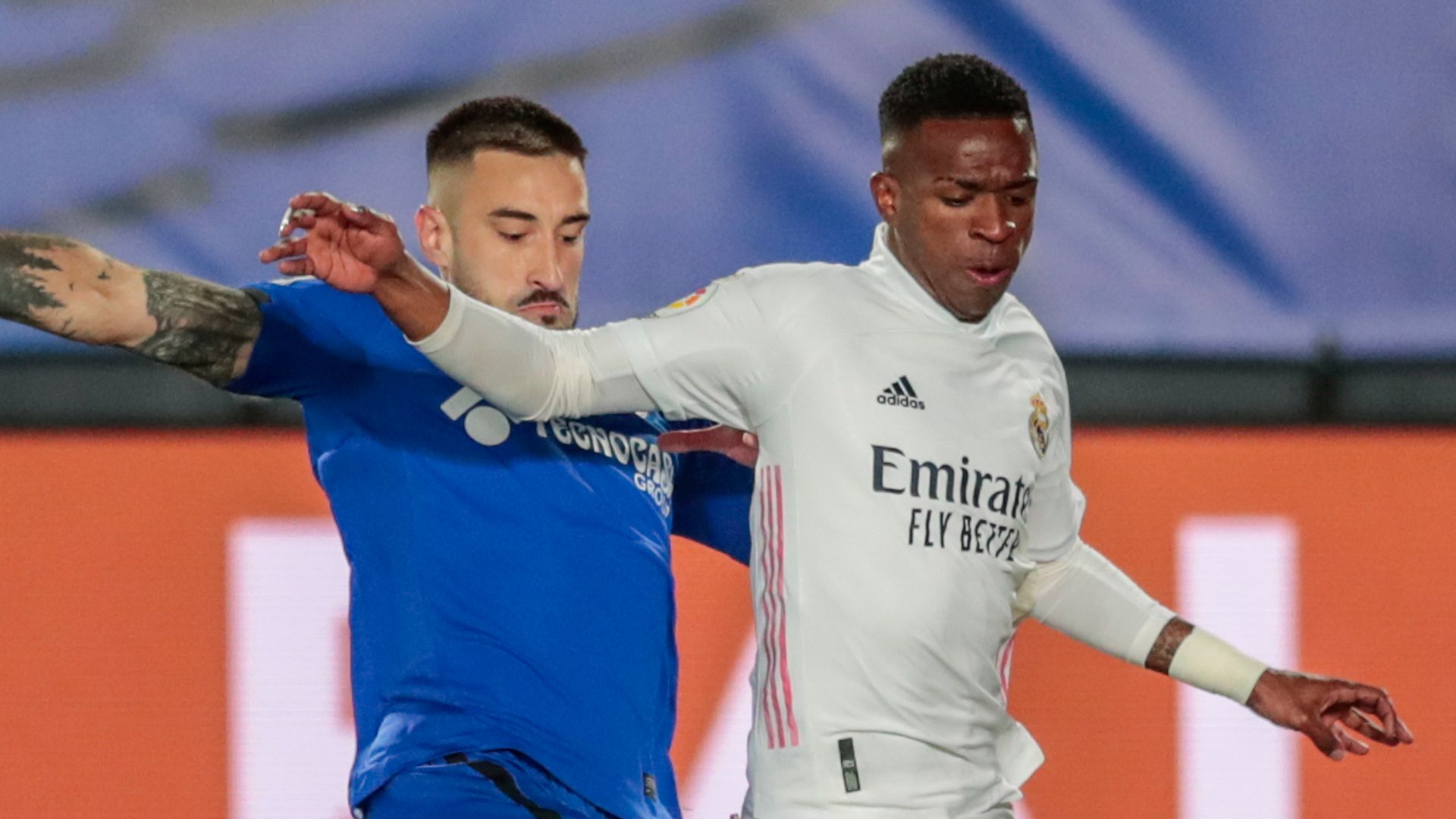 Real Madrid’s French duo Karim Benzema and Ferland Mendy struck in the second half as the Spanish champions overcame an injury crisis to beat Getafe 2-0 at home on Tuesday and close the gap to La Liga leaders Atletico Madrid to five points.Benzema leapt to connect with a curling cross from Vinicius Jr. and head Real in front on the hour-mark, giving the hosts a deserved lead after dominating the first half against an unambitious Getafe side who had only one shot on goal all game.
French left-back Ferland Mendy doubled their lead six minutes later, starting the move with a bursting run through midfield before sliding in to knock home a cross from Marcelo.The victory took Zinedine Zidane’s side into second in the standings and left them five points below Atletico, who drew 2-2 with Celta Vigo on Monday to end an eight-game winning streak but have two games in hand.”This win gives us a lot of confidence, I think we are on our way back to our best,” said Benzema.

“Getafe always make things difficult for you but we put in a big performance. We’re just focusing on ourselves, we’re not looking at the league table but we’re going to try to win every game because there’s still a long way to go in the season.”
Real were missing nine first-team players through injury or suspension, which led Zidane to field an unorthodox 3-4-3 formation which was particularly effective down the left-hand side due to the twin threat of left-backs Mendy and Marcelo.
He also gave 20-year-old midfielder Marvin Park his first start for the club, although the youngster only lasted 55 minutes before being taken off for 19-year-old Sergio Arribas.Defender Victor Chust also came on late to make his league debut.Juventus hold Inter to reach Coppa Italia final

Juventus booked a place in the Coppa Italia final after holding visitors Inter Milan to a 0-0 draw in their semi-final, second leg on Tuesday, sealing a date with either Napoli or Atalanta with a 2-1 success on aggregate.Romelu Lukaku and Lautaro Martinez had chances to get Inter back in the tie in the first half, while Cristiano Ronaldo came closest to adding to Juve’s aggregate advantage in the opening period, having scored both of their goals in the first leg.After the break, Ronaldo turned on the style and was only denied another goal in the tie by two fine saves from Inter goalkeeper Samir Handanovic.Inter threw everything at Juve late on but veteran keeper Gianluigi Buffon and his defence stood firm to secure a spot in the showpiece match against the winners of Wednesday’s semi, with Atalanta hosting Napoli after a 0-0 draw in the first leg.

With the away goals rule in place, Inter had to go for it and with Martinez and Lukaku in the starting line-up, Antonio Conte’s side certainly had the firepower to trouble the hosts.But 43-year-old Buffon, used only sparingly by Juve coach Andrea Pirlo this season, was rarely tested, despite Christian Eriksen putting plenty of dangerous crosses into the box.Inter committed more players forward as the match wore on, but the pressure was soaked up by the home defence as the visitors finished the match without scoring for the seventh successive trip to Juventus in all competitions.The result booked the Turin side a 20th Coppa Italia final appearance on May 19, with a re-run of last season’s showpiece – when Napoli beat Juve on penalties – still possible