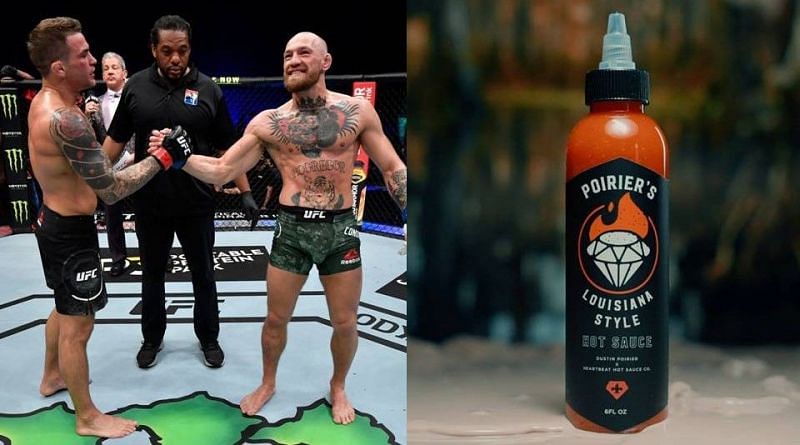 It looks like the business idea that Dustin Poirier pitched on Hot Ones may have worked.UFC lightweight star Dustin Poirier has taken to his official Twitter account to put forth a tweet featuring an image of the food show idea he had pitched. Dustin Poirier also added a statement to the tweet, where he noted that he has some interesting things on the horizon.Dustin Poirier’s tweet read – “We have some interesting things coming together!”On an edition of the First We Feast: Hot Ones, host Sean Evans noted that he heard about how Dustin Poirier is working towards establishing his own food show. Evans then asked The Diamond aka El Diamante whether he has an elevator pitch/concise sales pitch for the show. Dustin Poirier responded by stating:“I’ve got it here: Food Fight with Dustin Poirier. We go to different cities. I check out a couple of local gyms. I train with the guys there. Then we go to local restaurants, I get in the kitchen, cook a little bit, hear about their story – Food Fight (with El) Diamante. Boom.” (*H/T Sportskeeda for the transcription)The aforementioned food show idea that Dustin Poirier had pitched during his appearance on Hot Ones could become a reality in the near future. As of this time, apart from Dustin Poirier teasing the food show’s launch, official details regarding the show are yet to be announced. In fact, the show itself hasn’t been publicly confirmed yet.Dustin Poirier is on the cusp of facing Conor McGregor in a big-money trilogy fight later this year Dustin Poirier (left); Conor McGregor (right)

Dustin Poirier has evolved into a successful businessperson over the past few years, as evidenced by his ‘Poirier’s Louisiana Style’ Cajun hot sauce as well as other ventures such as his investments in the world of CBD.Furthermore, Dustin Poirier is coming off what many believe is the biggest win of his MMA career – a second-round TKO win over Conor McGregor in their rematch that transpired at UFC 257 in January 2021.The first fight between Dustin Poirier and Conor McGregor took place at UFC 178 in September 2014, where the Irishman beat the American via a first-round TKO. With their fight series now tied at 1-1, their trilogy fight is expected to come to fruition sooner rather than later.Both Dustin Poirier and Conor McGregor have expressed interest in the trilogy matchup, with McGregor and his team indicating that they would like the matchup to happen around May 2021.Their UFC 257 rematch reportedly garnered around 1.6 million PPV buys, the second-most in UFC history. Needless to say, if and when the Poirier-McGregor trilogy fight happens, it will be another big-money matchup for both the fighters.
Published 11 Feb 2021, 05:17 IST