Alou! Alou! Why Alou Kuol is the one to watch 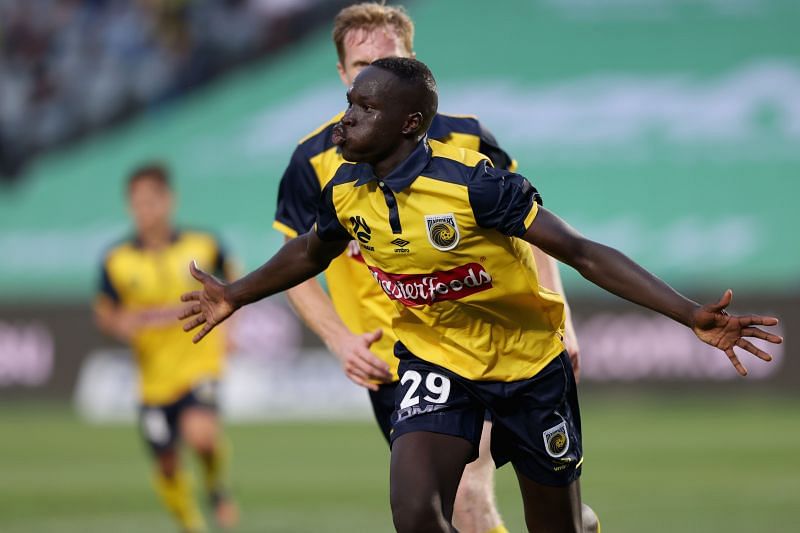 Remember the name Alou Kuol. He is still only 19, but he made headlines again on Sunday, coming off the bench to score twice for Central Coast Mariners and turning an impending defeat in A-League for Western United into a 3-2 victory.Alou Kuol entered the field in the 61st minute, replacing Matt Simon with his side 2-1 down. He scored twice in a four-minute spell to ensure his team would end the weekend at the top of the A-League table. Already a cult hero at the Central Coast Stadium, Alou Kuol is now attracting worldwide attention.There is a raw energy about the teenage striker. Born in Sudan, he and his family fled the country when he was an infant and arrived in Australia via Egypt. His performances and goal-scoring exploits for Goulburn Valley Suns confirmed his potential, and he made the move to the Mariners in 2019.Alou Kuol, who had unsuccessful trials at Melbourne Victory and ironically Western United before his arrival at Central Coast,has been courted by Portuguese giants Sporting CP. He remains one of the hottest properties in the A-League, but his long-term future appears destined to be elsewhere, as there is a bigger stage for his potential to shine.How Alou Kuol is making his name in the A-League Alou Kuol is already a cult hero at Central Coast Mariners.The new A-League season is proving to be an exciting one. Unlike the sterile nature of games across Europe played behind closed doors, that has not been the case in Australia. With fans back in attendance, the A-League has become one the must-watch division, with high-scoring fixtures becoming the new normal.As a result of the added interest, Alou Kuol is making the right impression at the right time. He is still developing, but there is a confidence and swagger to his game that reflects in his character. His post-match interviews show an obvious gratitude for the platform he is currently performing on; the challenge for manager Alen Stajcic now is to keep the player’s feet on the ground. Alou Kuol celebrates his winning goal for Central Coast Mariners against Western United.

Protecting and nurturing such an obvious talent can be a difficult balancing act, though. Alou Kuol will be desperate to play and continue to show his potential to perform at this level, and there will be a temptation for Alen Stajcic to see if the player can deliver consistently. However, there will also be times when he will struggle, and that will be the acid test.It is easy to perform when confidence is at a premium. Part of a winning team, Alou Kuol is being carried along by the success of his Central Coast Mariners team. They do not rely on him for goals, but his goals have proved to be a crucial part of their A-League title challenge. He is a luxury option, a free roll of the dice when things are not going to plan.Alou Kuol destined for a bright future

Alou Kuol is destined for an exciting future in the gameThe real test for Alou Kuol will be handling the frustration of not starting every week when the increasing hype surrounding his arrival demands more minutes on the field. Aluo Kuol’s humble beginnings will bring a sense of humility and gratitude for what he has already achieved, but while he has belief in himself, he will also soon start to believe the hype projected on him.Combining youthful exuberance with a nervous energy has brought the best out of Alou Kuol as he makes his first tentative steps in the professional game. Growing up in Australia, he has not yet experienced the challenges of moving away from his family to a new culture, language and environment, and these are the elements that could determine his potential to reach the very top.However, in the short term, the only goal for this exciting prospect is the next game. Alou Kuol is focused only on the Central Coast Mariners and the immediate challenges that come from sitting top of the A-League table. He may not be ready to start every week, but his form from the bench is making it impossible for Alen Stajcic not to consider doing so.It is crucial for Alou Kuol to keep his focus on the next game, and if he can keep developing with the right support of his club, he has every chance of being the next big thing. The rewards will come in time. This is a crucial period in the career of Kuol, and there are already clubs across the world monitoring his progress. Alou Kuol, remember the name!
Published 07 Feb 2021, 17:15 IST